To recap, last week I created and tested my first prototype “Foggy Mirror” a role prototype for my piece.

My goal for this prototype was to answer the question, “how will this app function in a user’s life?”. As I mentioned earlier, my intention is for this to be a critical design piece so this was a bit of a harder idea to swallow, but I still got some great insight from showing my product in class, and to friends, and getting feedback.

I also was very inspired this week by our lecture for Design for the Century by Mattie Brice, “Gesturing Towards Utopias”, which focused on how design paradigms can offer new avenues for resistance to system failures and oppressions. What inspired me from her lecture was looking at the oppressive tendencies in game design – especially in MMORPGs and the act of grinding, which is my favorite type of game :O – towards recapitulating capitalists frameworks and tendencies.

This resonated a lot with how I have been feeling and some of the things I want to convey in my product. She also mentioned an idea that helped me a lot with thinking about role prototypes and how to move forward from there:

“Can we design to make people feel the not yet?”

It dawned on me that in terms of a role prototype for critical design, I didn’t need to answer how my product would fit into people’s lives today, rather how it would fit into future people’s lives, using some of the tropes present today to create a connected narrative to my critical take on one potential future.

This helped me reframe my research question more succinctly as I do more research and move forward through my process.

“In a hypothetical future, given the way we are going with connected accounts and data collection, how could something as simple as a mirror app be distorted to collect data and gain revenue for ad partners?” 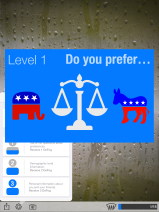 For my second prototype I wanted to incorporate the feedback from last week to create both a look and feel prototype of the user interface and intended experience and an interaction prototype to see if the act of clearing a mirror to see yourself would be compelling and interesting as the central metaphor and interaction for my app.

I used KeyNote to layout a new user interface for the app that was clearly NOT a game, and did a scan of similar “foggy mirror” apps, drawing apps, and general utilitarian apps across iOS since I’m actually and Android user, and needed to better understand how iOS apps should look.

I also started reviewing essential iOS development techniques on Lynda.com to understand what Apples User Interface guidelines are and what is common/possible when making different screens and layouts using Swift.

The interaction demo was built in large scale using cardboard to simulate an iPhone and the mirroring privacy windows stretched over foam for the mirror aspect. To test the interaction, I let users decide how to pay for the privilege of using the interface (wiping clean the mirror to see themselves) with cash, questions, and ads (a couple dollars I had in my pocket, questions I pre-wrote, and ads on my phone). Upon doing this, I began to realize that wiping a mirror clean to see yourself isn’t a very engaging thing to do for people, and from user feedback, I learned that most wouldn’t want to spend money or time to obtain the ability to do this. Someone also rightly pointed out that the camera app, native to phones, is unlikely to ever be monetized, and that is all that is needed in a pure functional utility app like a mirror. Good point. Ouch.

I updated some key concepts for the design of this prototype. I did more research into thinking about what types of questions I could create and how I could use behavioral psychology techniques to make them seem innocuous and exciting to answer. I tried to incorporate these into the look and feel demo to see how users responded.

After doing the interaction demo in class, it became obvious to me that I still needed to work on the questions and better research techniques that actual data miners and other companies use to collect, collate, correlate and analyze data for descriptive and predictive purposes.

For this reason, I’ve decided not to start coding my app for the play-test next week among our department, but to do more research on big data, how the questions work, how the data is collected, and how questions can be used to build linked user profiles. What kinds of questions must be asked? What if someone lies? How can you connect answers from different questions together to get a more complete picture?