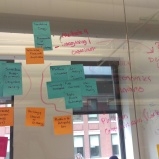 This week we were asked to start organizing our research interests into some domains that can guide research into both academic and artistic/design precedents for our work.

As part of this process and related research, I have changed direction a little bit, not abandoning my Grid of 9 interest mapping, but rather using it instead to think about what I am interested in overall, versus a specific project application based on those proposed. I decided that I’m fundamentally interested in the following:

I was also asked to write an impetus brief this week, explaining what I wanted to be an artist/designer and how I would use my thesis to realize these desires. As I charted my journey from my career in government and nonprofits it became clear to me that many of my fears and anger regarding technology were actually motivated by an intimate acquaintance with how public and social programs are decided upon and rolled out. Just like my concerns with top-down infrastructures in technology, I was dismayed by the top-down passage of ideas into culture through foundations and elected officials, the only participative flexibility and critique coming at the point of implementation.

When describing how I thought of myself in terms of being an artist/designer, something I still struggle to do most of the time, I found that I wanted to become one  because I was tired of being an administrator of programs, my creativity relegated to implementation and marketing. Coming to MFA D+T itself was a major shift in my life, versus going for a much more logical choice such as Urban Policy or Planning. But I’ve always been a techie, seeking to take apart and understand all of the new things that permeate our world as I watch people adapt around me to new means of communication and living that arise as a result.

For this reason, I want to make my contribution to the public sector in a new way, as a curator, a maker and communicator of ideas regarding cities and technology.

As I said in my paper:

“I feel a sense of responsibility as an Artist/Designer, Creative Technologist (or what have you) to ask questions that can shift the system, not just inform solutions to problems that arise within it; as a technologist to understand how these systems work, as an artist to spark critical speculation about what futures they may create, and as a designer to provide people with platforms they can use to push their preferred version forward.”

Both the Grid of 9 and the impetus brief helped me to realize that I am really interested in how Artists/Designers and should work with or the public sector to help people build futures they actually want to live in, not those motivated by some anonymous benefactors belief about how it should look.

Art and Design are powerful tools towards this end and maybe it is time for governments to stop focusing on administering other people’s ideas (since it certainly isn’t everyday people’s interests getting pushed forward anymore, its corporations) and to start working with people to come up with some ideas of their own and get back to making those real.

I started reading an excellent book during this time that helped me to imagine how this relationship might look. The City of Tomorrow: Sensors, Networks, Hackers, and the Future of Urban Life (The Future Series) by Carlo Ratti and Matthew Claudel, outlines an experimental approach to participative visioning through the concept of “future craft”. Born out of MIT’s Senseable City Lab future craft “employ[s] design in a systematic exploration and germination of possible futures.”  and is a process by which to “…posit future scenarios (typically phrased as What if? questions), entertain their consequences and exigencies, and share the resulting ideas widely, to enable public conversation and debate” (63).

Much of their work is inspired by Dunne & Raby’s concept of Speculative Design, which “…thrives on imagination and aims to open up new perspectives on what are sometimes called wicked problems, to create spaces for discussion and debate about alternative ways of being, and to inspire and encourage people’s imaginations to flow freely. Design speculations can act as a catalyst for collectively redefining our relationship to reality” (Speculative Everything, 2).

Another big influence for MIT’s Senseable City Lab was Buckminster Fuller’s idea of design science introduced in 1956 through their Comprehensive Anticipatory Design Science (CADS), which they defined as a method to “ solve problems by introducing into the environment new artifacts, the availability of which will induce their spontaneous employment by humans and thus, coincidentally cause humans to abandon their previous problem-producing behaviors and devices”

By combining these two methods and using Dunne & Raby’s speculative design methodologies to inspire the creation of actual artifacts, MIT has built a process to allow creative debate about the multiple alternative futures that exist and which we might want to make real.

However, while this process has been tested by MIT and other groups in various ways, I’m also interested in taking it a step further. I want to know how the outcomes from these processes can be used by communities and governments to allow for critical public debate and policymaking in urban environments. It seems like we are destined to become further and further enmeshed in a digital city of sensors, wearables, algorithms, and communication platforms so maybe it is time to step back and take a critical look at how we want to exist in those systems, who is making them, and who they are really making them for. In my opinion, government should play a crucial role in this process, facilitating an open conversation between citizens and the makers of technology, especially that which is implemented in private/public partnerships such as LinkNYC, the subway Wifi etc.

As I begin to shape my thesis questions, I want to further research how the concept of “future craft” can be used to drive cooperative policymaking in urban areas by using the future as a neutral space for creative debate.

I think that the outcome of this investigation will be a series of experiments following the methodology of future-making and speculative design principles that seeks to create artifacts from speculative futures and publish them in public forums to spark debate. At the same time, I must investigate ways in which cities and governments have used similar participative methodologies to drive policy to answer how I can take the results from these debates and use them to actually tangible next steps a government or community organization could take in addressing concerns and desires. I hypothesize that futurecraft might make urban technologies feel less opaque and more addressable, giving people agency into imagining how they should or should not be deployed.

In order to identify these important questions I did some whiteboard brainstorming:

Since I’m interested in exploring how designers can work with and within governments to collate debate around urban technologies using the future crafting process, I decided it was best to organize my research and design questions by the same steps.

2. Entertain the Consequences & Exigencies of those Futures

While useful to explore the research questions behind this methodology, I also need to ask some design questions if I want to follow it, or alter it for my own purposes. I created a separate list of design or process questions to help inform a rough outline of what my process of ideation, prototyping, and showcasing the work might look like, organized by the same three steps outlined by MIT in performing future craft:

2. Entertain the Consequences & Exigencies of those Futures

From the research questions I have been able to start identifying potential domains for academic research into informing my impetus and the importance and history of studying this body of work:

Similarly, I used the design questions both to inform further research, but also to make some choices about how the first prototypes might look.

In order to begin my research, I searched for sources in each of the above domains as well as precedents to inform design questions.

Thoughts on the First Prototype

For my first prototype, I want to focus on the first step of the future crafting process, Positing Future Scenarios (potentially using what if questions).

For the next week, I will heavily research how MIT Senseable City Lab undertook this stage of the process, as well as other forms of speculative design, speculative fiction, and group visioning that could be explored.

I will then design a prototype to test out one of these methodologies, designing a short in-class prototype of how a visioning session might look in order to understand what exactly it should look like, who should be involved, and how concrete the desired outcomes should be.

Some ideas I have before doing this research are:

I think the desired outcome of this prototype would be to how much and what information I would need to then move forward with developing potential artifacts from these speculated futures for the next round of prototyping.